One review of poor customer service from Perrys Vauxhall

This is the story of how Perrys Vauxhall in Canterbury, Kent, almost cost us £1,814 for a repair that would NOT have solved the problem we had.

What it proved to us was that main dealers will do anything to make money, regardless of the outcome for the customer.

As a result, we will never consider buying Vauxhall again.

Athough this story is about one particular Perrys car dealership, it could equally apply to many main dealers.

Here’s how everything unfolded, including how we found the solution to our problem – a solution that WASN’T provided by the main dealer (Perry’s Canterbury), which is what you’d normally expect.

It started with buying a car from Perrys Canterbury

It was bought as a mum car to ferry kids around and not go any great distances.

In 2018, the car developed a periodic fault that stopped the power steering from working, plus all the dashboard lights stayed on, and the speedometer didn’t work.

The car was difficult to drive and certainly unsafe to drive with children (including a baby), as it was hard to drive when the problem occurred.

Initially, the problem was resolved by stopping the car, waiting awhile, and restarting. The problem was also infrequent (3 times over two years).

Then it happened again and couldn’t be resolved by resting the car.  The AA investigated the problem but, unable to find an answer, took the car to Perry’s in Canterbury for further investigation. At that time, Perry’s couldn’t find anything wrong after diagnostics, and we took the car home, as the fault seemed to have disappeared again.

Our dialogue with Vauxhall

In March 2020 the problem became permanent and so we rang Perry’s, basically saying: “this car has been in before and you couldn’t find a problem – if we bring it in, can you guarantee to find the problem and solution?”.  They said they would, so we took the car to them, assuming they would be able to work out the problem this time.

There was a fault code (68) on the car and Perry’s reported back to us that the car needed a new EBCM (Electronic Brake Control Module), at a cost of £1,814!

To be quoted a price of £1,814 for a part seemed very wrong from two perspectives:

We asked Perry’s why such an expensive part would go wrong so quickly and they had no answers. Just that “it needs to be replaced”.

So we contacted Vauxhall centrally to raise the issue.  They said that the part (EBCM) had no known problems that required a recall and, after speaking with the Perry’s again, ultimately said that they supported the dealer in their assessment.

We then contacted Perrys Vauxhall again and asked for confirmation that the replaced part would solve the problem.

They wouldn’t commit to that. All they would say was that the error code said that the EBCM needed replacing and that’s what needed doing.

We asked: “so what happens if replacing that part doesn’t fix the overall problem?”, to which their answer was: “we would then investigate further”.

We went through different levels of staff but ultimately couldn’t get any further than them saying that they couldn’t guarantee the problem would be fixed by us spending £1,814 on the EBCM replacement.

So we asked them to check with all resources they have (both locally and with Vauxhall centrally) to find out what typically happens after an EBCM is replaced.

Specifically, what we wanted to hear (and we told them this) were some options, such as:

They didn’t supply that sort of information.

We asked them: “what access to extra knowledge about this do you have?”, but we kept getting the same answer: “we can’t say anything except that the part needs replacing”.

It was difficult to tell whether they were being obstructive or genuinely had no access to such knowledge. But it definitely felt that they didn’t care.

We assumed that any form of car dealership would have access to a knowledgebase that provided outcomes from work done within certain circumstances.  If they haven’t, then there is something seriously wrong with the way the industry works!

So we reached a stalemate – Perrys Vauxhall were not giving us any assurances about what would happen if we paid for the repair, and we weren’t happy about that.

So we spoke with an independent garage – Auto Jobbs near Herne Bay.

They weren’t a main Vauxhall dealer, but a small garage with a few staff, but who had a positive reputation for being able to work out the true nature of car problems.

Their response was a huge breath of fresh air compared to the stale attitude of Perrys Vauxhall.

We explained the scenario to Auto Jobbs and they said that it didn’t sound right, but that they would look at the car (at no cost to us), to assess the position.

We told Perrys that we weren’t going to pay for something that they couldn’t provide a more concrete answer about and went to collect the car.  They charged us for the diagnostics.  The two images below show their invoice charged for investigating the fault, plus their view that the electronic brake control unit needed replacement at a cost of £1,814.94. 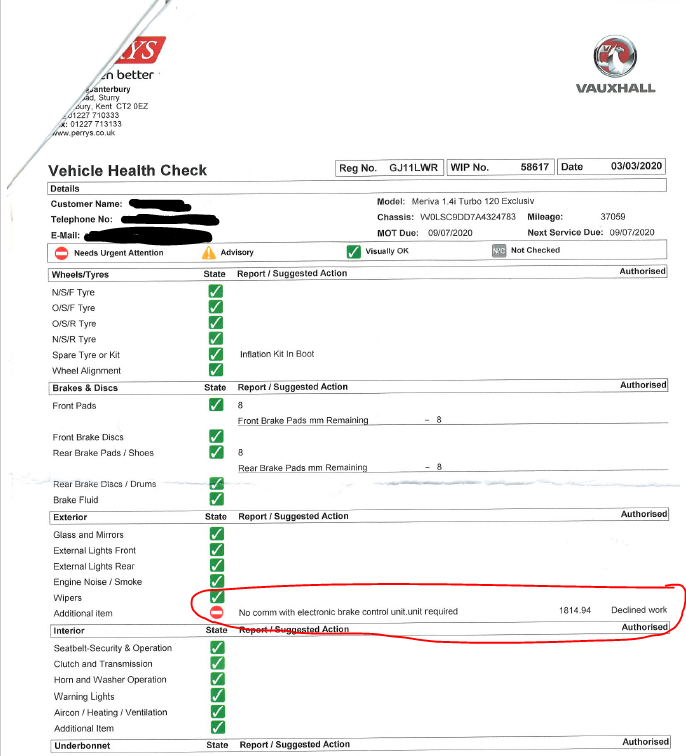 When we picked the car up, it was clear that they were unhappy that we hadn’t had the work done with them – their tone in dealing with us was quite different to what you’d normally expect.  In short, they didn’t like it that we weren’t going to fill their pockets with our money.

Fixing the problem that Vauxhall mis-diagnosed

It was only one working day later that Auto Jobbs contacted us.

They had found that the ABS unit (NOT the EBCM) was faulty and they said that it could be repaired by a company known to them. They also recommended replacing the original Vauxhall battery and a lead.

Just under two weeks later we picked up the car from Auto Jobbs, fully fixed at a total cost of £700, as you can see from their invoice below ….

While the car was with Auto Jobbs they kept us informed on progress, which was great customer service.

Why you can’t automatically trust a main dealer

If we had agreed to Vauxhall Perry’s replacing the EBCM, then that wouldn’t have solved the problem and we’d have incurred that £1,814 before they would have investigated further.

The questions to ask are:

Hopefully this story about Vauxhall Perrys will help people who are faced with a large repair bill (whoever they are being quoted by), and will encourage them to look around for other views on the problem they’re having.

For us, we will never go to Vauxhall Perrys in Canterbury again and would encourage others to stay away.   Whether buying a new or used car, or just taking a car in for repair, they can’t be trusted to provide a professional or honest service.